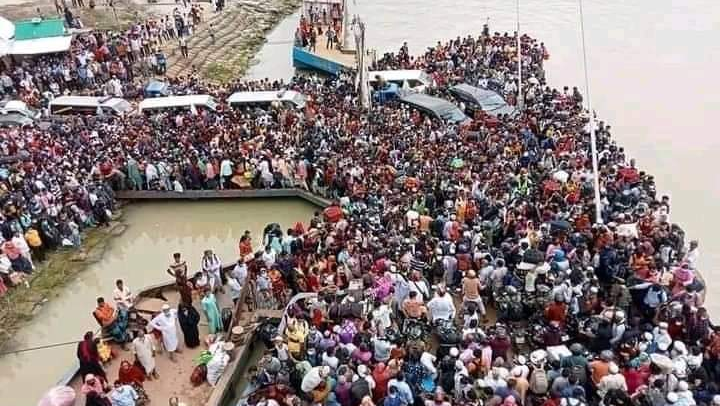 Since beginning of the global COVID crisis Bangladesh enforced multiple local, regional and national lockdowns with various level of intensity and effectiveness. The Ready-Made-Garments (RMG) industry, backbone of the Bangladesh's economy contributing up-to 80% of the country’s export, however, remained unaffected from lockdowns fearing worst economic consequence with social and political risks in case millions of workers take to the streets for losing income.

Special Treatment of the RMG sector

Avoidance of all previous lockdowns was possible mainly because of the RMG industry’s powerful and frantic lobbing until the ongoing “toughest lockdown” from 23rd July - 5th August. This time too, though only with little extra bonus, all RMG factories and it's related businesses have been allowed to re-open on the 1st August, four days ahead of the rest of the nation’s “strict lockdown” for others, much to the dismays of the health professionals and epidemiologists, who describe the current Delta, or B.1.617.2 variant, first identified in India in December 2020 as 40-60% more transmissible than Alpha and almost twice as transmissible as the original Wuhan strain of SARS-CoV-2.

The majority of the country's almost five million RMG workers, who found a bit extra time-off to visit their families and love once in their villages and saving some expenses of urban living, are now on their way from all over Bangladesh to join their work place tomorrow, the 1st August 2021 at 09:00 hrs. sharp, most likely carrying the deadly Delta, or B.1.617.2 in their bodies with logical and unavoidable consequences thereof.

One RMG factory owner, who employs more than 20,000 workers, expressed his serious concerns about the consequences in the next weeks and months after opening his factory but he said that he had no other options but to open the factory because his order books were full and his buyers were merciless about the price, quality and shipping schedule.

Exports from Bangladesh have been facing unexpected delays for the last couple of months due to the global shipping container crisis. According to Bangladesh main seaport, the Chittagong port, officials it has been the case partly for the congestion in many Asian transshipment ports, especially in Singapore, Port Klang in Malaysia, and Colombo in Sri Lanka, meaning containers that took goods for export from Bangladesh to foreign countries, have yet to return those containes for another shipment.

Hapag-Lloyd, one of the world's biggest container shipping companies has suspended carrying fresh Bangladesh-bound cargoes from Singapore port, which may worsen the ongoing container crisis in Chittagong port.

Far greater and more sustained delays to delivery default risks may be rooted in the Bangladesh's notorious high level of non-performing loans in the banking sector as the default loan outpace recovery rate and clearly evident by official announcement of the country's honourable finance minister in the parliament by numbering more than 300,000 loan defaulters in Bangladesh referring to the country's central bank's relaxed policies on loan classifications, helping reduce default loans, stated the honourable minister further.

Last but not least, the Bangladesh’s ca. $8 billion revolving credit risk from the global retailers and brands remains a serious threat to the already stressed economy of Bangladesh, particularly that of the Banking and RMG sectors until such credit terms are revised and adequately secured on a priority basis. It is just a matter of time when the disaster strikes because certain amount the credit is expected to default beyond COVID-crisis, which an economy like Bangladesh is bound to hit hard.