Business leaders have urged the government of Bangladesh to extend the moratorium facility on loan instalments at least until June this year.

The businesses made the demand at a meeting of the Council of Chamber Presidents-2022 on Saturday. The Federation of Bangladesh Chambers of Commerce and Industry (FBCCI) arranged the meeting in Dhaka, reports UNB.

The apex trade body fears around 50% of businesses would default without the extension of the just ended moratorium. Presidents and vice-presidents of districts, cities and chambers of women entrepreneurs from all over the country addressed the meeting. 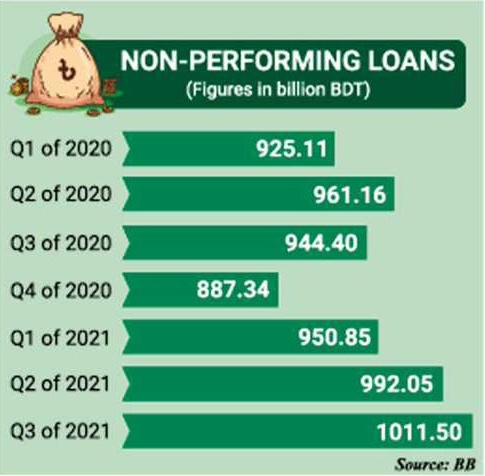 Despite policy support including the recent moratorium by the central bank classified loans in Bangladesh's banking system swelled to more than EUR 10 billion Euros or one-trillion Taka mark, as of September 2021.

According to the Bangladesh’s central bank moratorium regulations, clients remained creditworthy even after failing to pay any instalments in 2020. Borrowers required to pay just 25% of their scheduled instalments, which was further reduced to 15% for the small and medium enterprises (SMEs), in order to remain classified as creditworthy in 2021. The facility was introduced in mid-2020 amid the Covid-19 pandemic and extended several times until 31 December 2021 to allow businesses to cope with the financial challenges.

The president of the FBCCI fears “at least 50% of the borrowers” in Bangladesh would default if the moratorium for loan classification was not extended until June at the least, demanding classification of creditworthiness for borrowers with outstanding loans:

of their due repayments to remain creditworthy.

What does credit default mean in Bangladesh?

Credit default risk in Bangladesh does not mean exactly the same as in any functioning economy. There seems to be always a way out – so far!

The seriousness of the matter this time around, however, feels different for various micro and macro economic rationales, including but not limited to, the increased government spending, piling foreign debt services, funding expensive infrastructure projects including building nuclear power plant, collapse of labour remittances from the Middle Eastern and other countries, hefty import bills for consumer goods and services, food, machineries and energy supplies to name a few major heads on the expenditures side.

Bangladesh’s graduation from LDC to MIC country group in 2026 would put it in open competition with many far better performing economies in the region and beyond, potential loss of the EU GSP trade privileges and concessional loans from bi-multi and supranational donor and financial institutions are important elements to factor in economic outlook for Bangladesh.

Rapidly increasing cost of living is another serious concerns to the economists and analysts, forcing the policy makers to consider devaluation of the national currency at unprecedented rate.

Bangladesh economy’s high dependency on a single item export as major foreign currency earning source, the readymade garments (RMG), is increasing volume based only generating very little to no net value addition to the country’s economy for years. The RMG sector is also heavily subsidised by the government making it a loss making enterprise for the revenue collection of the government, which now feels the pinch harder than ever.

Most commercial banks are under intense pressure for recovering bad loans from borrowers, which the RMG sector remains as single largest defaulter of, ultimately pushing the RMG sector looking for alternative funding, including borrowing from buyer and importers, for financing their raw material purchase and operation costs in many cases.

Whether or not the international buyers, business partners and clients would serve as alternative bank to the high risk borrowers from Bangladesh, which banks in their own country decline to lend to, remains to be seen.