by Mr. Mosharraf Hossain Bhuiyan*
Ambassador of Bangladesh to Germany

Jute was the main cash crop of East Pakistan (present day Bangladesh) during the Pakistan period. Jute and jute products were the main exports of Pakistan – sixty-five percent of the country’s national income originated from the agricultural sector. The presence and position of tea and leather in domestic use and exports continue to grow. A large number of goats and cows is sacrificed during the holy Eid-ul-Azha in the Muslim majority country every year.

Besides, the meat of these animals is bought and sold throughout the year. As a result, the production and supply of leather in the country is increasing. The leather sector started its journey as a business in this country in the forties of the last century. In 1940, businessman Randa Prasad Saha (RP Saha) established the first tannery near Narayanganj.

The tannery industry was established at Hazaribagh in Dhaka in October 1951 through a gazette notification announced by the then government. This sector has been making significant contribution in earning foreign exchange in post-independence Bangladesh.

From the eighties onwards, the garment industry as an export product began to emerge and spread in Bangladesh. At present, 85 per cent of the country’s export earnings originates from the ready-made garment sector. In the post-1990 period, the production of crushed and finished leather, shoes, bags and other leather goods has gone beyond the limited range of wet blue production and the leather sector has diversified its exports.

Bangladesh’s leather and leather products are also known abroad and are considered as the second largest export product. In 2013-14, the revenue from leather and leather products was 1,258.82 million US dollars. In the next three financial years, the export earnings of this sector were 1,130, 1,161 and 1,234 million dollars respectively. In the 2018-19 financial year, the export income of this sector was 1,019.78 million dollars.

However, the demand for Bangladeshi leather products in the international market has never been as expected due to the lack of environmental compliance in the country’s leather processing and production. Since 2017, the ongoing progress of the leather sector has been declining.

Due to the increase in the prevalence and prevalence of coronavirus in the world, the export income decreased to 797.61 million dollars in the fiscal year 2019-20. The leather sector has come down to the third place after losing the second place in terms of export earnings.

Leather and leather products are an export oriented industry based on domestic raw materials. It is a potential sector in terms of growth of national income, foreign exchange earnings through exports, employment and value addition. The Ministry of Industries undertook a project through Bangladesh Small and Cottage Industries Corporation (BSIC) to build an eco-friendly leather industrial city with the construction of a modern central waste treatment plant. 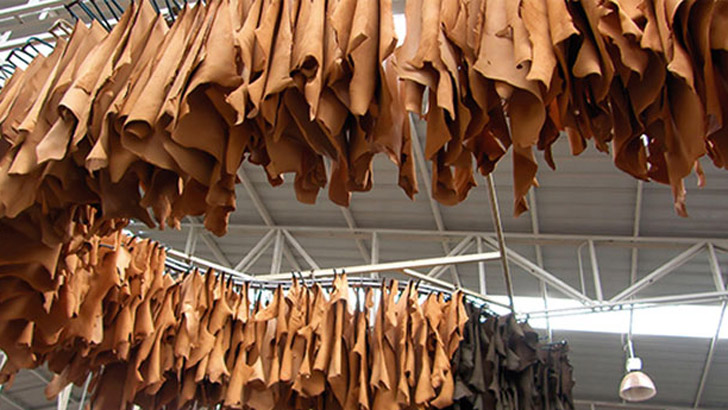 Bangladesh government acquired 200 acres of land in Savar for this industrial city project spending BDT 175.75 crore from 2003-05 to set-up an environment friendly modern leather industry  by relocating all scattered tanneries in old Dahaka and elsewhere by constructing various facilities including CETP and constructing roads and related infrastructure.

205 plots were set up and 155 industrial units were allotted for setting up tanneries and factories in the industrial city. Although the CETP was initially planned to be funded by the tannery owners, it was later decided to set up the CETP with government funding and the project cost was revised to BDT 545.36 crore and extended till 2010.

A Chinese company got the job as per the tender called for some more technical works including construction of CETP and dumping yard and the order of His Excellency the High Court. In March 2012, the company was given a work order for 24 months.

In August 2013, to make the CETP more up-to-date, the total project cost was fixed at BDT 1,078.71 crore, including compensation of BDT 250 crore to the tannery owners by adding three components namely sewage treatment plant, sewage power generation system and solid waste management system. BUET’s BRTC is appointed to supervise and monitor the CETP construction work. In the fourth amendment of the project, the estimated cost has been increased to BDT 1,015.56 crore excluding the SPGS component and the time has been extended till June 2021.

But the Chinese contractor company could not complete the work on time. The company continues to extend the time on various excuses. None of the water, salt, sludge, chemicals etc. are being purified properly through CETP. The company has extended the time 10 times in 6 months and one year. An agreement was reached to complete the work by 31 December 2010 through the MoU signed for the 11th time increase. In fact, the project implementing authorities became hostages to the company. Recently the company has applied for more time.

In the meantime, all the tanneries were shifted from Hazaribagh to the industrial city of Savar in April 2016 on the orders of the government and the High Court. Before the completion of the various components of the CETP, 130 industries started their production. Earlier, waste and polluted chemicals from Hazaribagh were mixed in the water of Buriganga river, now the pollution from the tannery estate in Savar is being mixed in the water of Dhaleshwari river.

Meanwhile, the Department of Environment has imposed a hefty fine on the Tannery Industrial Area Authority. A grand effort to consolidate all tannery industries in an eco-friendly tannery industrial city with CETP, roads, waste management, etc., funded by the government and compensating the affected tannery owners, has yet to succeed due to the incompetence and negligence of the Chinese contractor company.

Although the country’s exporters of leather and leather goods continue to export on a limited scale, buyers in the United States and Europe are turning away due to the lack of Leather Working Group (LWG) certification. In spite of having high quality leather in the country, big entrepreneurs import leather from abroad and make leather shoes, bags and other products to meet the conditions of compliance. Some big entrepreneurs import high quality shoes, bags etc. made in the country but keep ‘Country of Origin’ secret without writing ‘Made in Bangladesh’.

The UK-based LWG certifies whether leather goods are produced in an environmentally friendly manner. Tannery and leather goods manufacturers in Bangladesh do not qualify to apply for the certificate by fulfilling the required conditions.

The owners of small tanneries evicted from Hazaribagh have not yet been able to start business on their own plots in Savar. Many entrepreneurs in this sector are already defaulters in different banks. That is why they could not raise new loans.

The abandoned land of Hazaribagh has been declared as ‘Red Zone’ by RAJUK. That is why tannery owners are not able to sell their land or establishments or use them for any alternative purpose. If they could do that, their financial problems could be alleviated. On the other hand, RAJUK is not willing to acquire this land.

The plot or land allotted for the new tannery estate in Savar has not yet been deeded by the BSIC. Because of this, many have not yet been able to pay all the installments of the land price. After paying the price to BSIC, you have to pay interest again.

The bank is refusing to provide loan by mortgaging the land as the lease deed has not been completed. However, Bangladesh Bank has recently announced some more facilities or incentives for leather industry entrepreneurs, including rescheduling of defaulted loans for the next ten years, which could help in their rehabilitation.

The rise and expansion of the ready-made garment industry in the country has been facilitated by all the logistical facilities in transport and ports, including easy loans, tax and tax exemptions and cash incentives provided by the government. By 2024 or 2026, Bangladesh will move from Least Developed Countries (LDCs) to developing countries. Then there may not be duty-free access to the export of ready-made garments to the European market.

In that case, the goods will have to be exported to the European market with an average tariff of 7.8 percent. Bangladesh will have to get GSP Plus facility in the European market before the readymade garment industry collapses. As an alternative, it is important to establish another sector as eligible for export. This potential sector is the leather industry sector.

The current COVID-19 epidemic has also had a negative impact on the leather industry. Due to the ongoing global lockdown, the sale and purchase of leather and leather products has declined. Because leather goods do not fall under any of the necessities. Entrepreneurs have faced great challenges due to the negative impact on this industry. About 5,000 workers have lost their jobs due to the closure of leather processing due to the epidemic. In the current situation, a large number of workers are becoming unemployed.

As the CETP and waste management of Savar Leather Industry City has not been completed in an environmentally friendly manner yet, the responsibility of management is not being fully handed over to the committee formed to manage the private owners. On the other hand, it is necessary to consider whether it is appropriate to extend the project, which has been going on for the last twenty years, after June 2021.

Compliance is the main challenge for tannery and leather goods manufacturers. ESQ (Environment, Social and Quality), ISO and other national and international compliance guarantees will attract international buyers as soon as possible and will help in obtaining LWG certification.

In the light of the above, some of the following steps can be taken to overcome the current state of the leather industry:

1. Incompetent and failed Chinese contractors can be extended to the Chinese government and blacklisted without further extension.
2. A thorough survey through a professionally experienced and expert company is required before handing over waste management including CETP to the private management committee. This work can be done through European specialized companies. German GIZ or EU assistance may be sought if necessary. In the absence of such assistance, the work can be done with government incentives. Following the proposed survey, successful commissioning and waste management of the CETP can be completed by doing what is required. This may take several years. In the meantime, entrepreneurs can get special loans from banks on easy terms.
3. If the price of the plot of land is paid, BSIC can execute the lease deed without taking interest, so that the owners can mortgage the land in the bank while taking loan.
4. By occupying the land in Hazaribagh, the government can carry out planned urbanization or allow RAJUK to sell land or build buildings by lifting the ban.

*Author is a former Senior Secretary of the Government of Bangladesh and currently serving as Ambassador of Bangladesh to Germany.